I wanna point out there ia a guy out there making Apps compatible with Android 1.0 even if he was only able to test them in Android 2.3 and older. A file explorer and a music player is not much but it can revive very old Android devices as Music Players.

Multiple #AndroidAppRain|s today. Firstly, @fdroidorg came up with 2 rounds, summing up to 47 updated and 7 new apps:

* Android Cache Cleaner: clean cache of all installed apps at once
* Destiny: send files with E2E encryption without revealing your identity
* Earth View for Muzei: Google Earth View plugin for Muzei
* Aves Libre: AVES! LIBRE! FINALLY 😍 An image gallery you MUST check out (and you know how rarely I say "MUST" when it comes to install an app 🙈)

After 2 years of negotiations with Microsoft, the German Data Protection Conference issued a damning statement: German schools must not use MS365 due to privacy violations. American cloud providers do not comply with strict German privacy protection laws and must not be used by German schools.

Almost there! Help us reach our #GivingTuesday goals by supporting #GNOME with a donation: https://www.gnome.org/donate/ This is a repository of apps to be used with F-Droid. Applications in this repository are official binaries built by the original application developers, taken from their resp. repositories (mostly Github).

Today is #GivingTuesday! As a nonprofit Foundation, we rely on sponsors and individual donors like you to keep the project going.

We hope for #GivingTuesday2022 you'll consider supporting us with a donation:
https://foundation.gnome.org/2022/11/29/giving-tuesday-kicks-off-gnomes-end-of-year-fundraising/ An actual email we just sent to a couple colleagues:

"Let's figure out the best time to knock out a monthly ThunderCast recording. We'll need 90 minutes, a few notes beforehand, and lots of energy!

NOTE: Any similarities between my schedule and World Cup rest days are completely coincidental..." The path to bringing you a great email experience on Android devices begins with K-9 Mail, which joined the Thunderbird family earlier this summer.

As we work towards a modern redesign of desktop Thunderbird, we’re also working to improve K-9 Mail as it begins its transition to Thunderbird mobile in Summer 2023.

Read more about today's new release of K-9 Mail on the Thunderbird blog: The dream of an audio desktop with soundscapes. The terminal turns red when running sudo? Add a cautious tone to the gentle terminal soundscape. The website you're browsing is secure? Layer on a safe tone to the scape. Like this isn't just for blind people. Neuro-divergent people would probably like the constant feeling of the soundscape, and the ability to maybe simplify the visual interface, since all the icons for state, like battery status high, Internet connected, or even extra layers like RAM used, CPU usage, and disk space used. And those indicators don't have to be constant sounds, they could be sounds called up by a keyboard commands or voice commands. There are so many things that designers haven't tried with sound. But oh yeah terminal turning red, that's easy haha /s. Ugh. Ah well. Linux is made by the majority, for the majority. Oh but if I can code I can make it, right? Right? I just have to learn C, C++, Vala, Rust, GTK, QT, and so on. Oh and sound design. And GUI design. Yeah no. And then I'd have to be the one to maintain all that because no one else will. No one.

After I canceled my yearly Office365 subscription, Microsoft gave me some of my money back. I donated it to @libreoffice I encourage you to give a yearly donation. 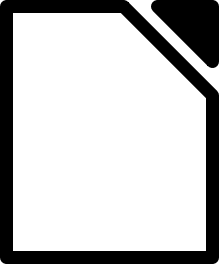 I canceled my Office365 subscription yesterday. @libreoffice does all I need. I always add the so useful @grammalecte extension for grammar and spelling.

Berlin, November 24, 2022 – LibreOffice 7.4.3 Community, the third maintenance release of LibreOffice 7.4, the volunteer-supported office suite for personal productivity on the desktop, is immediately available from https://www.libreoffice.

Yesterday I installed #Thunderbird (@thunderbird), entered my e-mail and password of my self-hosted e-mail server (which doubles as #Nextcloud instance), and everything just worked beautifully and automatically. Contacts sync, calenders (including colors), e-mails. Grateful for the hard work from so many people to make using #FOSS not only viable, but downright pleasant.
#foss #nextcloud #thunderbird @Thunderbird

Since Flowit turned out to be great I went and looked up its developer, ByteHamster.
Lo and behold, he's also heavily involved in maintaining two favorite and indispensable apps of mine, #AntennaPod and #K9Mail. A true #FOSS hero! 👏

Seems to have a (albeit idle) Mastodon account, too -> @ByteHamster This is a repository of apps to be used with F-Droid. Applications in this repository are official binaries built by the original application developers, taken from their resp. repositories (mostly Github).

Here's a screenshot of #K9Mail's current message view. And two more showing what the NEW message design will look like! 👀

We've added some comments in the margins explaining some of the new features and UI elements.

Thunderbird for Android is taking shape, and it should be here before Thunderbird Supernova releases next summer!

(Note: This is by no means final, still a lot of polish and work to do) I can't sign this as I am not a constituent of the EU, but I hope this comes to pass and the EU forces some responsibility into the #tech corporations. Goodness knows the US isn't going to lead the way.

Introducing Upscaler, an application that lets you upscale and enhance images. I released 1.0.0 yesterday and it is now available on Flathub!

Find and install hundreds of apps and games for Linux. Enjoy GIMP, GNU Octave, Spotify, Steam and many more!

So what does today's #AndroidAppRain bring? Well: 9 updated apps in my repo plus 10 updated & 1 new apps at @fdroidorg:

Hi! I'm [the Pink fork] – a fork of Mastodon for Android. I exist because the official app is lacking many important features, which I intend to bring back!

Some of my features include:

Visit my GitHub for downloads and more information:
https://github.com/sk22/mastodos#readme "KDE e.V., the non-profit organisation supporting the KDE community, is looking to hire a software engineer to help improve the software stack that KDE software relies on."

It's a #remote contract position, and a great paid opportunity for people who have already contributed to KDE software. But even if you haven't, you can still apply! All details are in the linked job description. Good luck 💪
#foss #dev #remote @KDE

And you get even more inclusive towards contributors because you stop locking out young people and citizens of US-embargoed countries!

#AndroidAppRain today brings you 9 updated apps in my repo, plus 31 updated & 1 new apps at @fdroidorg:

Enjoy your #free & #foss #Android #apps at, with and from #FDroid

Just learned today there's a pendant to #FDroid for #macOS & #iOS users called "App Fair". I'm not using any #Apple device – but if you are, you might be interested to take a look. And if you're a developer and want your #FOSS #app there, I'm sure you'll want to take a look as well: Coming to #android? No way! Currently using FairMail, but honestly the interface is pretty rough. And the other #foss option I'm aware of is K9 which is very old school and doesn't really cater to the archiving approach to email. I'm really excited to see what Thunderbird will bring.
#android #foss

The State of the Onion is livestreaming in 30 minutes!

Learn more about what the Tor community is up to! Get updates on exciting software projects! Learn more about the people and groups that keep the network running! Learn how you can get involved in the fight against censorship and surveillance! Generally have a good time! State of the Onion - Community is a compilation of updates from the Tor Project different projects, highlights of the work from projects that are part of the...

Tomorrow (Wednesday at 1700 UTC) we're presenting Part 2 of the annual State of the Onion!

Last week's presentation focused on in-house Tor Project teams; tomorrow will be focused on community projects. (This part is always super interesting to me.) State of the Onion - Community is a compilation of updates from the Tor Project different projects, highlights of the work from projects that are part of the...

I wish people who have strong opinions on the software they use realize that they cause harm when they shit post and denigrate the very people working on the software. It's one of the more toxic elements of community that I absolutely abhor. I've spend the better part of 15 years challenging this toxic behavior.

shitposting is not really going to get any of your issues resolved. #GNOME does not have infinite resources and certainly evolution only has one main contributor. Since this FOSS, jump in and help. These kinds of posts are unhelpful and causes harm to the people who are maintaining these software without pay or compensation. Denigrating their work is a poor way to pay them back while using their software.

#KDE #software is many things: free, beautiful, performant, customizable. How about all of that plus #sustainable?

KDE adopts #SustainableSoftware as one of 3 overarching goals to focus on!

> Software has an impact on our future. It has an affect on #energy and #resource usage. KDE can deliver software which does this in a way which preserves #environment and society for us and future generations. Are there any #decentralized #foss alternatives to #GoogleDocs ?

Since you seem to be getting excited about the redesigned calendar in #Thunderbird Supernova, it's an appropriate time to mention that the ENTIRE application is getting a modern UI overhaul in 2023!

You can track our progress here: https://developer.thunderbird.net/planning/roadmap

(That link also leads to our Thunderbird Android roadmap).